I am sure it won’t have escaped your attention that Great British Bake Off is back.  Still dividing opinion it would seem on whether it should be on Channel 4 or not, and how it isn’t the same with out Mary but it’s not about that for me.  It’s about watching bakers create things in a tent and discussing on Twitter who our instant favourite is, and who we think will win.

Oh and what we think of Noel with short hair.

And with the return of #GBBO comes the return of #GBBOBloggers, a weekly bake along hosted by Jenny over at MummyMishaps where we bake along with the week’s theme and then blog about it.  This year Jenny is also joined as host of the linky by Helen who blogs over at  Casa Costello, and hopefully lots of other bloggers will join in each week too.   It is a great way to show off our recipes and get to know other baking bloggers and their recipes.

A couple of years ago I was awarded star baker one week for my Jaffa Cakes (even if I did cause uproar on Twitter when I temporarily had them upside down mid assembly) and then I only went and won a major prize donated by Tesco for my Gin and Dubonnet Cake showstopper at the end of the series.

This year it is just for fun but I need an excuse to get back in the kitchen as baking makes me happy.  I often create disasters but at least there is still a blog post in a culinary disaster, right?

This week I have made Bourbons as it is biscuit week.  I did contemplate the showstopper of: “selfie somewhere special” but I don’t think there is enough biscuit dough in the world for that so I made Bourbons instead.

It is very simple recipe but just a bit fiddly at the end as you do need to pay a bit more attention than I did to the edges.  And them being a uniform size.   Pah to that though I say.  It’s still a chocolate biscuit and there is rarely anything wrong with that: 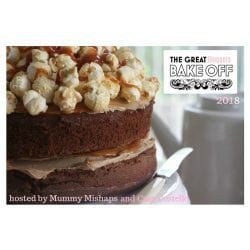