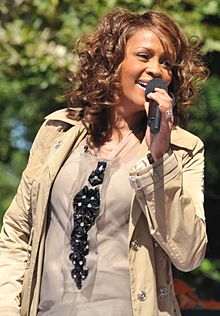 We have woken up this morning to the sad news that Whitney Houston has died.

“Houston has a problem” to paraphrase a great quote, and has had for years.   Her drug abuse has been well documented and early reports today indicate that her death is connected to an overdose.  Though not yet confirmed.

Whilst I am sad for her family, it is her daughter I feel for most.

Yes Whitney was an amazing talent but it is safe to say that her performances in the last five years have been somewhat shambolic.   How can we forget her X Factor appearance in October 2009.   She could barely string a sentence together when interviewed by Dermot afterwards.

Back in 2002 she denied using crack but she did admit to using other drugs.  Ten years ago!  And actually if she was admitting it then it had probably started a few years before that.

How can this be allowed to happen?  I know that addicts have to “want to be clean” and to seek help (please don’t lecture me on addiction, I know about addictive behaviour) but surely somebody in her entourage could have done more to help.  Couldn’t they?   Over ten years of seeing this beautiful woman destroy herself.

She comes from an adoring family, a dynasty of singers.   She has a teenage daughter, she has managers and advisers and not one of them managed to get through to her?   I am not saying they didn’t try.    But could they have done more?

Where does that leave them all now?   Beating themselves up, thinking they should / could have done more?   Certainly.

Her daughter, not yet 20 tortured by the idea that she was not enough, maybe?  Not worth living for?  Her mother couldn’t get clean to see her grow up into a gorgeous young woman and maybe go on to have children of her own.

That’s the tragedy of all this.

It is desperately sad that at the age of 48 a woman who seemingly has it all has died alone in a hotel room.

So I am sorry, I have no sympathy for Whitney.  If she had wanted to get clean, she could, I am sure.  There are some amazing treatment programmes that she could have signed up to, money certainly wasn’t an issue, and she could have got off those drugs.

She could have lived longer.   She chose not to.

My sympathies are with her daughter, Bobbi, who is waking up to this today and reading some news articles that blame her dad for her mum’s demise.

And that is the real tragedy.